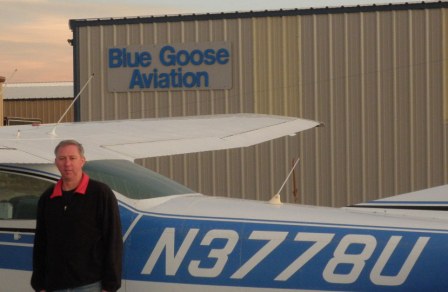 Joe Kuberka started flying in northern Minnesota in 1978. His love of aviation is still as strong today 40 years later as when he took is first training lesson.  Joe attended the University of North Dakota from 1979 to 1982 graduating with a BSPA in Aviation Administration and earning his Private, Commercial, Instrument, Instructor, Multi Engine and Glider ratings at the University. He joined and has been active with AOPA since 1979 and EAA since 1982. In 1983 Mr. Kuberka joined the United States Air Force and flew for 20 years as an Air Force pilot. He flew B-52 bombers, and KC-135 tankers for major weapon systems. He also spent two tours at the USAF Academy selecting which cadets would be Air Force pilots and teaching basic airmanship.

Major Kuberka taught the mountain flying course to Academy instructor pilots and checked out as a Montana Mountain Search and Rescue Pilot. He also attended the Air Force Aircraft Accident Investigation Course and held a safety officer designation for over 10 years. Duties in this area lead to teaching numerous classes on cockpit resource management and risk management. Joe earned a Master of Aeronautical Science from Embry riddle Aeronautical University in 1994. During his entire Air Force career he maintained his civilian ratings and owned an aircraft since 1988. Continuing to increase his own knowledge of aviation he added an instrument instructor rating, glider instructor rating and sea plane rating to his license.

He is an aviator with over 11,000 hours that loves to instruct, while promoting safety to other pilots. Since retirement from the Air Force, Mr. Kuberka has developed a self flying guided mountain air tour allowing pilots to gain mountain flying experience while vacationing in the Rocky Mountains.

Receive information about courses and and lessons in your inbox.
Newsletter Signup